We entered into Arkansas through Texarkana where the main drag is also the state line, Texas and Arkansas license plates intermingle, and the state flags on lampposts to each side of the road remind you, just in case you forgot, which side belongs to which state.

Stopping here only briefly we continued to drive east as the sun set and a gorgeous harvest moon rose up, peeking from behind the increasingly dense forests. Only relatively dense of course, nothing like those evergreens up North 🙂

We made a short stop in Hope, Arkansas to drive past the Birthplace of William Jefferson Clinton, 42nd President of the United States. Your grandparents had a nice house Bill.

Our destination for the night was Hot Springs which has been a resort getaway for a hundred years, the main attraction: Hot springs! We pitched our tent in the campground at the state park, made some food, and hunkered down for the night. It wasn’t suppose to rain but it was so humid and moisture just seemed to hang in the air. No rain came but plenty of noise did. I don’t think I’ve ever been at a less peaceful campground!

First, Rachel and I both woke up to our campsite neighbor starting their car at 5:00 AM. OK they are getting an early start OR just moving their car, turning it on or off (and they should get that engine looked at). God only knows what they were doing. Meanwhile, some other campers arrived later than us, set up camp, gone to sleep, and left their yappy dog outside tide to the car. Yip yip yip YIP YIP YIP the moment anyone walked nearby.

For some reason I felt incredibly well rested pretty earlier and got up. I made a makeshift yoga mat and went through some sun salutations, a few poses, boy has it been a long time since I did yoga! Boy did I feel sore later from the little I did!

After breaking down camp we headed in to town to see the old bathhouses, taste the hot mineral spring water (I liked it!) and eat at McClard’s, Bill Clinton’s favorite boyhood BBQ place. Good call Bill.

McClard’s was delicious! We split an order of ribs and I lay claim to the baked beans while Rachel took care of the cole slaw. Don’t worry we traded a few bites, cole slaw is even starting to grow on me. 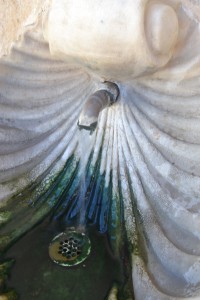 From Hot Springs we drove into Little Rock and visited the William J Clinton Presidential Library to culminate our tour of Bill Clinton in his home state. We both enjoyed the LBJ library better but we didn’t have as much time to spend there.

The Clinton library was extremely interesting as he was president when I was growing up, but that’s about all I knew. He definitely had more of a presence in the library’s design than LBJ did and I still can’t decide if I like that personal touch more. I would have like to see a more unbiased presentation but hey, its his library.

The best exhibits were about Bill and Hillary’s childhood as well as life in the White House. However, downstairs there was just too much information. Good bye attention span. There was a really cool lego art exhibit though. 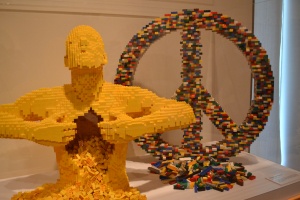 We walked along the river to the gift shop and to see the revamped downtown area (that is quite thing to do these days it seems). It was beautiful out so we decided to grab a drink outside and reveal in the “mild” Arkansas weather.

Although we enjoyed Little Rock we weren’t done traveling for the day. Two more hours of driving would take us south to a much smaller town called Monticello where my grandmother Kittye Mae use to live and where she is now buried. I hadn’t made a trip back since Kittye Mae’s funeral in the summer of 2008 so it was good to be going back, even if the family isn’t there anymore.