In the past five days we hit up three major Texan destination: San Antonio-Austin-Houston. All were strikingly different. 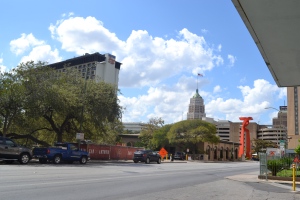 To our great surprise we emerged from our hotel room to a torrential, humid downpour. Not exactly what we are use to. We loaded up the car once more on Friday morning and set out to explore San Antonio, what a day it would be! For breakfast we followed our guidebook’s recommendation and went the Guenther House Restaurant at the former mill. It was a beautiful setting, the house is kept in immaculate condition and the river is just to the side.

Rachel and I had agreed on a big breakfast and a big breakfast it was. I ordered biscuits and gravy, one of my favorites and it was quite good. The second best yet (nothing has trumped PJ’s in Reno, NV yet). Their coffee was also a pleasant surprise, the house coffee included a blend of seasonings that were tangy and tasty but not overpowering (sorry Starbucks). Perhaps best of all was our table, outside on a covered veranda we could watch the clouds shift and shape, would it pour or would it hold off so we could enjoy sunny San Antonio?

The weather held off, at least rain wise if not humidity wise. We checked out the Blue Star area which hosts a brewery, several artists’ galleries, a bike shop, and the Blue Star Contemporary Art Center which seems central in the community.

The Blue Star Contemporary Art Center was a nice change from art museums. It was small and featured mostly local San Antonio artists. All of the art was modern and highly visual. My favorite piece was a series of photographs of brooms. Highly detailed, surprising colors they really turned the ordinary into something unexpected.

We also made a new friend at Blue Star, Daniel. At first we thought Daniel was working at the museum but soon found out from his meandering dialogue that he was in fact an artist picking something up from a previous show. Not only was it fate that Daniel and Rachel have the same birthday (December 5th!) but we had plenty to talk about; old nautical posters, estate sales, the Alamo, natural remedies for eye cysts, etc. All in all it was an thoroughly enjoyable twenty minutes in the Blue Star parking lot and we left laughing with many new treasures from Daniel’s collection of odds and ends.

Time to tackle some history. We parked at the mall (go figure) and wandered over to the Alamo. Now, if I were a professional historian asked to create the tour and exhibits for the Alamo well, I wouldn’t do it the way they did. The most interesting thing about the exhibits was how the Alamo was “rescued” from commercial interests and returned to its rightful place of historical importance. Especially to Texans.

After the Alamo we wandered around downtown San Antonio and found ourselves on the famous Riverwalk. Like several other things I’ve seen the Riverwalk brings to mind Disneyland in the well paved, people-funneling, almost too perfect, sense of things. After a quick bite to eat we entered the mall in hopes of getting our parking validated but left with no such luck, and several new purchases.

From San Antonio we drove about two hours (with traffic) to Austin, Texas which many people have to both Rachel and myself we would love.

1 thought on “The Texas Triangle”