Greetings from Phoenix! While I have a comfy place to sit and internet I’ll give a full update of my travels.

I spent a wonderful Sunday in LA! Nikki, Jared and I hit up the flea market nearby at Fairfax High School and then wandered through The Market and The Grove (if Disneyland made a mall). After sitting for maybe 15 minutes I headed down to Venice to meet my “Oregon” friends Ryan, Nicole and Justin. Fun fact: Ryan was the first person I ever met at UO, at Introducktion. Now we get to kick it in LA 🙂 While I didn’t stay in Venice long it was definitely its own scene and the Chinese food we had was great AND you got to bring your own booze. Love it when you can do that. To complete my day I grabbed a beer with another friend, James who sailed with us at Oregon when I was a freshman! So long ago. So many embarrassing stories. The kitty, Garcon, and I spent one more evening snuggling on the couch (I had to clarify again that it was not o.k. to sleep on my face).

Monday, I had planned to leave early-ish in the day for Joshua Tree but…plans change! Instead I ventured through Beverly Hills to Rodeo Drive. Whew. For my thoughts at the time read more here. Then I meandered to Santa Monica for lunch and a stroll along the pier. All of this adventuring helped me pass the time until I went to UCLA to meet with a professor in the Geography department. I only cited him like six million times in my thesis so the little nerd inside of me was jumping with joy to meet him and seek guidance from his wise Phd-self on the path to graduate school (dundunDUNNNN). You Bruins have a pretty sweet campus, reminds me of UO but warmer. 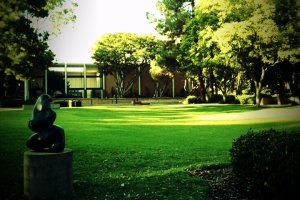 Tuesday morning was go time! Unlike the first few nights where I was fortunate enough to stay with my friends in LA (thank you guys!) in Joshua Tree it was time to camp. Camping is not my forte but apparently all that time around gearheads in the NW paid off and some stuff sunk in. I arrived in Joshua Tree early afternoon, swung by the Visitor’s Center and then decided to grab food across the street at the Joshua Tree Saloon. It was pretty rad! The bartenderess was very friendly and helpful as were the locals that were hanging out in there. My chili cheese dog filled me right up.

Driving through the park you can see a lot of the scenery and there are plenty of places to pull over for an impromptu photo shoot. That afternoon I did two loop hikes. One called Hidden Valley, which indeed led to a valley that had much more greenery than the surrounding area. The second, lead to Barker Dam where I got a great view of some Big Horn Sheep grazing near the puddle of water that was behind the dam. The king of the heard had some pretty freaking BIG HORNS. I would not want to mess with that. I also spotted some quails and a few sneaky lizards. With about an hour of daylight left I staked out a campsite in the Jumbo Rocks campground and climbed some big ol’ boulders to watch the sunset. It was a quite evening with lots of stars and distant planes overhead, quite a contrast to the greater metropolitan region of Los Angeles. But still California.

Wednesday it was time to head East. First, a 20 minute detour up to the Keys View where you can literally see the San Andreas Fault. The fearful, fitful point where the North American Plate and Pacific Plate choose to tango. The smog was also very obvious from up there and although yesterday morning you could see Palm Springs apparently some days you can’t even see that far. It’s just truly mind boggling.

I love all the little info signs and self-guided tours they have in national parks, its like Wikipedia in real life!

From Keys I drove through the rest of the park, refueled in 29 Palms and headed East on route 62. As a result of flooding in Cottonwood, the South entrance to the park, I had to meander on some smaller state routes before joining back up with I-10. It was quite the drive, way out there in the desert, seeing a car every once in a while. I’ve come to decide that I like the desert a lot more than I would expect but it is a place that’s good to visit, with air conditioning.

To be honest I thought for a while that I was already in Arizona and had simply missed the signage because of my detour. It was only mildly disconcerning not knowing which state I was in, I had been very excited about leaving my home state, but when I finally did cross into Arizona I knew it. The welcome sign was colorful, although I had no camera at the ready, the signage changed, I think the font might even be different here. Arizona plates and ASU stickers were everywhere. Hurray! State #2

Phoenix is a sprawling as it description suggests. To figure out where I was and where I was going I stopped at a Starbucks. My barista asked me how I was doing, what I was up to for the day and I told him.

Oh, yes on the sweetener, I just arrived. I’m on a road trip around the U.S. for three months. What should I see in Phoenix?

His jaw dropped a little unnecessarily but he did give me a good tip, it was the free night at the art museum and the new exhibit was Modern Mexican Art, supposedly very good. To the museum I went! I explored the Modern Mexican Art which is from a single individuals collection tracing Mexican art since the revolution. Walked through (and got yelled at for taking pictures- there were no signs saying I couldn’t!) the fashion gallery. The Phoenix Art Museum also has the largest collection of miniature rooms made by this one lady, all historically accurate and itsy bitsy.

By the end of my exploration into art I had gotten in touch with my future PiC (Partner in Crime) Rachel’s aunt and uncle who were kind enough to host me in Scottsdale. Once I found their home we grabbed some delicious green chile bacon burgers (say that five times real fast and see if you’re not hungry) at a very cool burger/bar/ranch/former bunkhouse/cool music venue place. There is no better compliment to an Arizona meal thank donkeys braying in the background. Well, except great company and conversation! Luckily I had all of the above.

Now today, after a much needed shower= CLEAN), I am heading North, to Sedona/Flagstaff and then tomorrow to the Grand Canyon. I am still a day behind my posted route but I think I am going to make that up in Colorado, there is just too much to see here!

I will upload my photos soon as well, hopefully before the Grand Canyon.